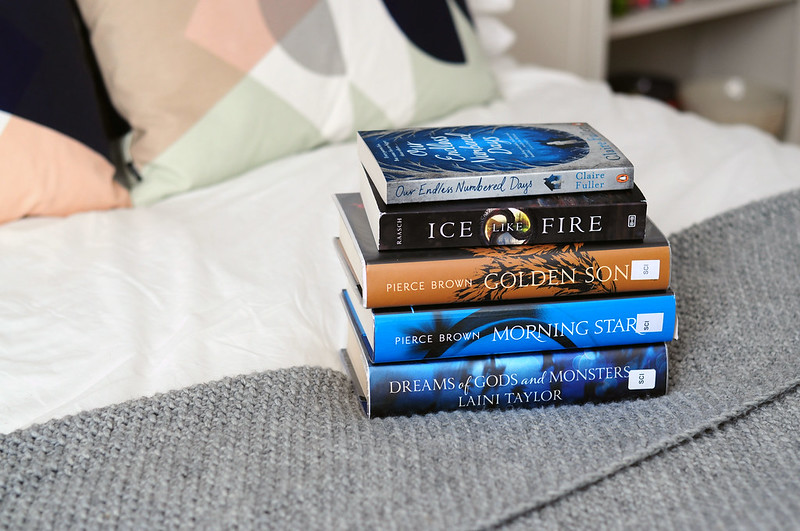 In January I wrote about the books I wanted to read next and although I only read three out of the six, I'm back again with another new stack. I've been behind on my Goodreads Reading Challenge by one or two books pretty much each week and I can't seem to catch up!

Our Endless Numbered Days was an impulse buy while doing the food shop. I hadn't heard anything about it but liked the cover. I'm glad I picked it up though as I've heard more people talk about it recently. Ice Like Fire is the second book in the Snow Like Ashes trilogy. I wasn't a fan of the first book and felt like it could have been written in a paragraph as nothing really happened until the final thirty pages or so but I don't like to leave a series unfinished and am going to give it a try at least.

I finally finished Red Rising after starting it about six months ago and am now moving onto the next two. This is another series that I haven't liked as much as I thought I would. I loved the beginning but I didn't think the world building was that great and I found myself struggling to imagine it as I was reading the book. I've started Golden Son which I haven't gotten into yet despite having read seventy pages so far. If I can remember correctly, it starts two years after Red Rising ended but I feel like there's a whole book missing as there is no recapping or explanation on what's happened.

I finished the second book in the Daughter Of Smoke & Bone trilogy which was part of January's pile and have the third lined up to read next. It took a while for me to get into this series but now I love it and can't wait to read how it ends.