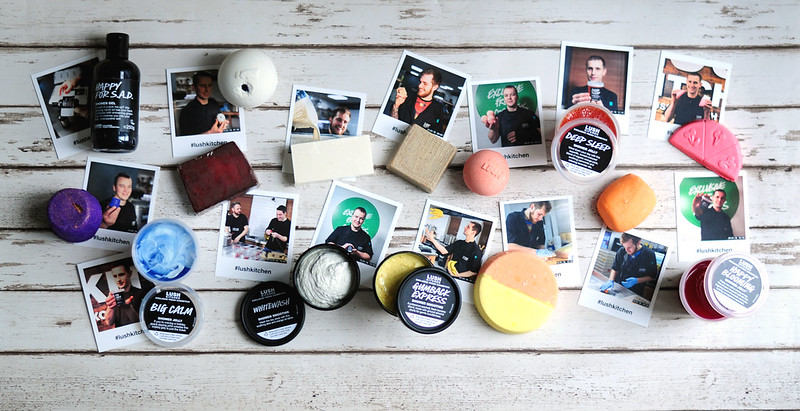 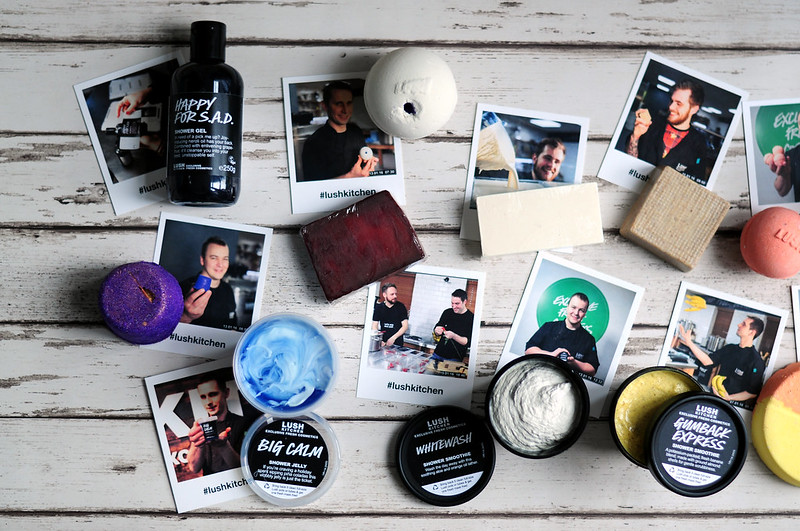 Happy 4 Sad Shower Gel | £10.50 // I never tried this shower gel when it was first released in 2004 to raise awareness of Seasonal Affective Disorder. After reading a couple of reviews about it the when the menu was released I knew I wanted to try it. It's a citrusy shower gel that is a mix of neroli, grapefruit and mandarin and is the perfect thing to use in the mornings. I also think it would be a really nice one to take on holiday with you.

Phoenix Rising Bath Bomb | £4.50 // This is one of the bath bombs that has only recently been discontinued and I still kick myself that I didn't stock up when the news broke. Although I do know that these don't store too well so maybe it's good that I didn't and instead can use a fresh one or three from the Kitchen. I'd forgotten just how good these smell after about a year of nothing using one. As you can see in the polaroid photo, this bath bomb starts out as a bright blue which then deepens to the purple you can see in the photo which is pretty cool.

Big Calm Shower Jelly | £8.25 // I just can't get over how amazing this shower jelly looks! It looks even better in person as well as you get the scent alongside it as well. It smells just like a piña coladas and almost good enough to drink. This has been brought out in the Kitchen a couple of times now I think but it's always sold out very quickly and I am pleased I finally own a tub.

Ne Worry Pas Bath Bomb | £3.95 // If like me you love parma violets then you'll love the scent of this bath bomb. This is one of the few that I've actually tried before so I knew I liked it and wanted to buy one when it come out that week.

Ro's Argan Gourmet Soap | £7.50 // I watched the live feed of Dan and Simon making this soap since it was the one gourmet soap I knew I wanted to try. It was really interesting to see the soap being made but also hear the background stories of where the ingredients came from and the ideas behind them. The name gives it away, but this shares the same scent as Ro’s Argan Body Conditioner which is one of my favourites. I'm expecting this soap to be incredibly moisturising and I can't wait to use it.

Quinquireme Of Nineveh Soap | £4.25 // A plain looking soap that actually smells amazing. The scent reminds me of a coconut cocktail with a hint of vanilla.

Whitewash Smoothie | £9.75 // These shower smoothies are my favourite and I wish Lush sold more of them. Whitewash's scent is orange and mandarin and contains aloe vera gel to soothe the skin. This will be a good one to use in the summer or on holiday. 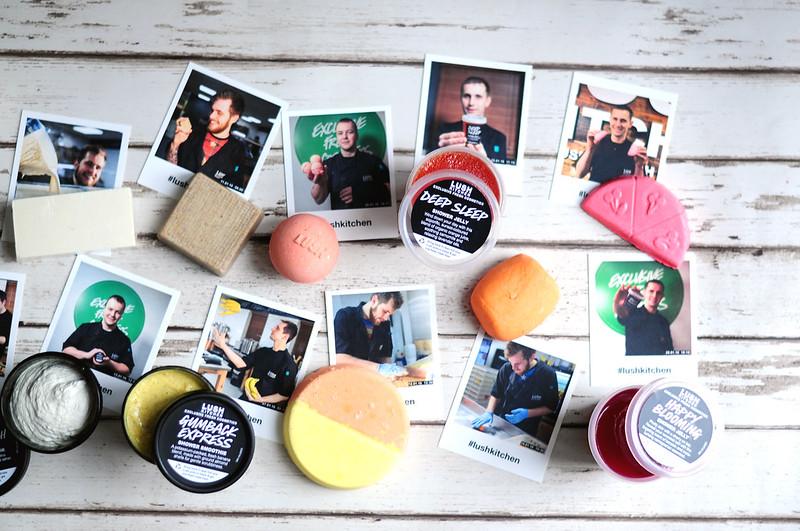 Aqua Mirabilis Body Butter | £6.75 // I wasn't going to order this as I've tried it before but then I was putting my order together and couldn't resist. I like these body butters from Lush as it means I don't have to apply body lotion as they're so moisturising. This one in particular is also a body scrub and is made up of ground almond shells.

Gumback Express Shower Smoothie | £12.95 // This is one of the Kitchen items that I'd never heard about before and I did a bit of reading up on it before deciding if I wanted to try it or not. The description of it smelling like banana ice cream was pretty much enough to persuade me to buy it. There's also almond shells mixed into it for a bit of exfoliation. The consistency is quite thin and watery which I was surprised about and might make it a little more difficult to use. I've seen someone on Instagram decant it into a bottle which she says makes it a lot easier to use so I think I'll be doing this as well.

Dream On Bath Bomb | £3.25 // As a huge fan of Dream Cream Body Lotion and Dream Wash Shower Smoothie I knew I had to try the bath bomb which shares the same scent. The Dream products really help to soothe my skin and eczema and I can't wait to use all three together. I was surprised at how small this bath bomb is though considering the price is the same as the larger bath bombs.

Happy Pill Bath Bomb | £3.75 // Another one I've had before and knew I wanted to try again. This bath bomb is giant but unfortunately mine didn't travel too well and has cracked in two. It'll still work fine but it just won't look as impressive in the water as it would have. The scent of this one is similar to the Happy 4 S.A.D Shower Gel and I think I'll use the two together.

Deep Sleep Shower Jelly | £7.95 // One of the menus during January was all about having a good nights sleep and it was one of my favourite weeks to date. I think I pretty much bought everything apart from two things. Deep Sleep was another one that I have wanted to try for a while but has sold out quickly when released each time. The scent is a mix of lavender, chamomile, neroli and orange.

Hot Milk? Bubble Bar | £3.95 // This bubble bar is described as soaking in a bath of hot coconut milk, engulfed by silky bubbles of uplifting patchouli and Brazilian orange oils. I hate to say it, but I really don't like the scent of this one and I might have to pass it onto someone else. The scent really isn't what I imagined it to be which I guess is the downside of ordering online.

Happy Blooming Bath Melt | £4.75 // This on the other hand I knew I loved and I wish I had bought more than one. At least I can get three uses out of it! This smells of cherries and it is gorgeous. It is also made up of calamine powder which really helps to soothe my skin as well as it feeling moisturised and soft.

Happy Blooming Shower Jelly | £7.95 // Since I love the bath melt so much I had to buy the shower jelly as well. It shares the same scent, obviously, and I think it has only been made one other time to celebrate Lush's 10th year online.