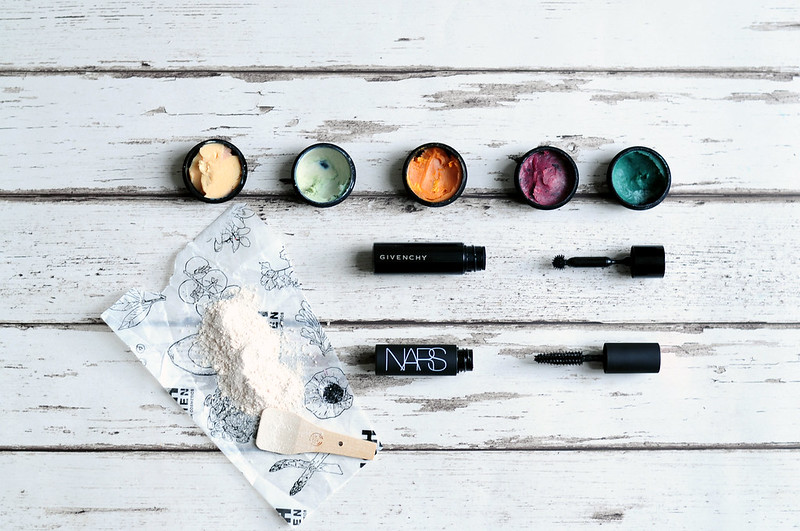 Lush Roulades // I absolutely loved the shower smoothies Lush used to sell, especially Dreamwash, but they discontinued them as they were introducing some new products. The replacement is now described as a roulade which I was quite excited to try especially as one is still named Dreamwash. I asked for some samples when I placed various orders so I could try them out first before buying the full sizes. I've tried them all now but I just don't like them. The best out of them is Dreamwash which I'm pleased about but it still isn't anywhere near as good as the original. They come in slices like a roulade so there is no packaging which I don't like. I'm all for less packaging and everything but these really do need to be kept in something, if not then they dry out even more. I've been scooping out a small amount and sort of lathering it like a normal soap. I find them too dry and they just sort of either crumble into the water as I'm using it or don't dissolve properly as I use it. I think they could have been amazing but the consistencies just aren't right. They need to be creamier and soft like the originals. It's such a shame as I really wanted to try the original Turkish Delight Shower Smoothie but didn't get a chance to buy a tub before it was discontinued. I also don't think much of the scent of Enzyme, the green roulade on the right.

Givenchy Phenonemeyes Mascara | £23 // When this was first released, I had no interest in trying it and didn't buy it. A few months ago I got a sample size in a gift with purchase and it did intrigued me especially since I technically hadn't spend any money on it. As expected, I'm not a fan and I'm even more pleased I didn't buy it to try it. I find the wand too hard to use and because of this I haven't properly been able to test the formula. It is much easier to use on the bottom lashes but I have the Clinique Bottom Lash Mascara for that job.

Nars Audacious Mascara | £21 // There was an offer on the Space NK website when this mascara was first released and you could get a sample with an order. I needed a few other things so I placed an order straight away. I tend to gravitate towards plastic mascara wands instead of brushes so I thought I'd like this one. I find the formula too wet for my liking although it might dry out over time. It's the wand that I really didn't get on with though and I found it too spiky. The bristles are spaced out too much that it doesn't seem to coat each lash and instead they clump together.

Lush Candy Floss Showder | £12.50 //  I really like the idea of this from Lush, but the packaging just does not work and this is why it has a place in this post. If it came in a plastic tub or bottle then it wouldn't. First of all the packaging is cardboard so what's going to happen when your in the bath, you've got wet hands and you need to pour it into your hands so you can use it. Also the powder inside is going to get clumpy if it gets damp as it's not completely sealed. When I went to pour it into may hands too much came out at once so I ended up wasting quite a lot of it. In the end I decided to decant it into another empty container which made it a lot easier to use. Onto the actual product, it smells amazing and reminds me of Snow Fairy. The powder gently exfoliates the skin and if you mix it with a little bit of water it creates a sort of shower cream. I enjoyed using it, but it is quite expensive and now I've tried it I probably wouldn't buy it again.