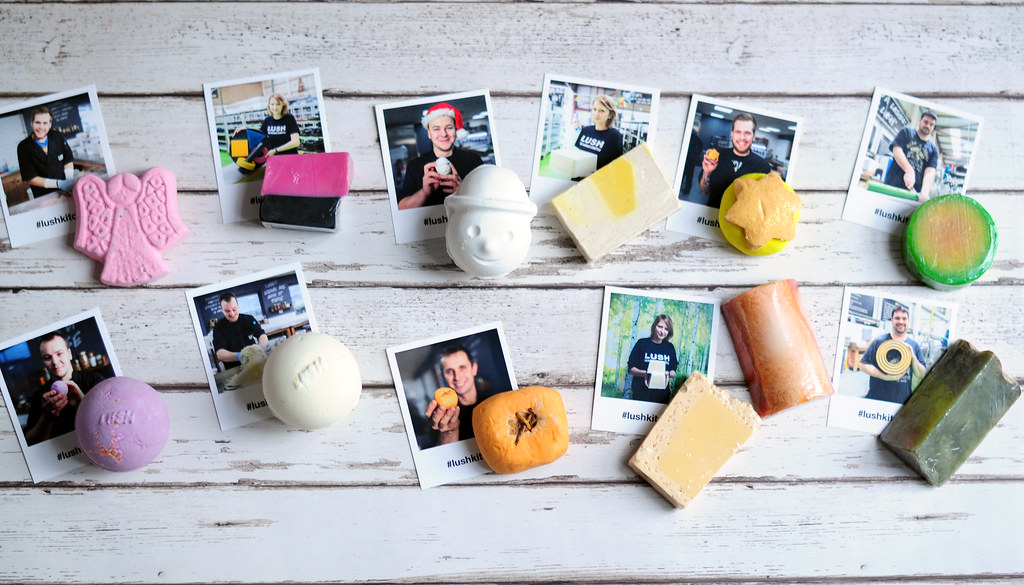 Christmas Angel Bath Bomb | £3.50 // Christmas Angel has the same scent as Haagenbath which is a now discontinued bath bomb that I really wanted to try. Luckily this one still has the same scent just a different design and it's one I actually think I prefer. It's slightly smaller than the standard bath bomb size which I prefer as I have a smaller than average bath, or at least it feels like it! It smells of mint chocolate, one of my favourite combinations and actually has bits of chocolate in it that melt once in the water. I've bought a couple of these although I have been struggling with finding products to use a long side it. I don't really have any other bath products that match a mint chocolate scent so I've just used it on it's own. I think Butterball Shower Gel would have worked really well with this one as I've heard it has quite a strong chocolate scent but I missed out on getting it in the kitchen this month. That's the only problem with the kitchen, a lot of the popular products sell out really quickly and I tend to only make one order per week.

Jingle Spells Bath Bomb | £3.95 // This is the only one out of them all that I've tried before and knew I liked. It's quite an unusual scent, a mix of fennel, ylang ylang and tangerine. It has the same scent as Wizard Bubble Bar which was a favourite of mine from Christmas 2014 and The Magic Of Christmas FUN which was part of this years collection. Jingle Spells is a fairly plain bath bomb compared to some but I liked that it is packed full of glitter stars that float in the water.

Bertie Soap | £3.75 // The scent of this soap is really disappointing and I am hoping it'll smell stronger when I actually come to use it. As you can guess from the name, the main scent is liquorice but to be honest, I just cannot smell it. To me at least, it just smells a bit soapy and I can't really smell the fennel or tarragon.

Brandy Butter Bath Bomb | £3.95 // This was a bit of a hit or miss product for me as I wasn't sure if  I'd like the brandy scent. It's ok and I'll enjoy using the bath bomb but if it comes out in the Kitchen again then I wouldn't rush out to buy it. You can definitely smell the brandy in it but it's mixed with tangerine, cinnamon and is packed full of cocoa butter which makes it a nice one for the winter.

The Boog Bath Bomb | £3.50 // I hadn't heard of this bath bomb before but just looking at it, it's one of my favourites. Peeping out of the edges I can see a few different colours so I think it'll give a similar effect to Luxury Lush Pud and Golden Wonder. It has a strong pine scent which just reminds me of when you open the front room door and all you can smell is the Christmas tree.

Hot Toddy Bubble | £3.95 // I was tempted to buy the Glogg Shower Gel that was available at the start of the month, but since I already have the Hot Toddy Shower Gel which is quite similar, I thought I'd buy the bubble bar that has the same name so I could use them together. I think this is one of my favourites and wish it was available all year round or at least brought out in the Christmas collection. The mix of cinammon, clove , orange and lemon is gorgeous and despite the design of this one being quite plain compared to others, I love it.

Sticky Banana Soap | £3.25 // I bought a lot of soaps this month and really need to put myself on some sort of ban as I have no idea how I'm going to use them all. I loved the sound of this one as I feel like it's going to be extremely moisturising. It's made up of fresh bananas, soya oghurt and honeycomb and smells delicious.

Sea Salted Caramel Soap | £4.25 //  This has a similar scent to Yog Nog Soap which is one of my favourites. You can see the chunks of sea salt around the outside and has a gorgeous smoked caramel scent that fills the whole room even when you're not using it. I feel like this will be another moisturising one and I know salt actually works really well for my eczema.

A Gold Star Bubble Bar | £3.95 // I feel like I've said it a lot in this post, but I really love the scent of this one. Again it features sandalwood, one of my favourites, along with frankincense and has quite a strong refreshing lemon scent. I can imagine the water of this bath isn't going to be too pretty but it'll make a lot of bubbles and will smell nice so I can ignore the pee coloured water.

Cream Of Tomato Soap | £2.95 // I bought this soap simply because I just could not imagine what it would smell like so I really wanted to try it. Could a soap really smell like tomato soup? Yes it can. I can't make up my mind if I like it or not. There's hints of basil and it reminds me of the Jo Malone Tomato Leaf Candle which I like but then sometimes it just smells like straight up tomato soup. I think it might become a kitchen hand soap as I don't really want the bathroom to smell of tomato soup the whole time I'm using it. Would you try this soap?

Green Gold Soap | £3.75 // This is one of my favourite soaps I've tried from Lush and it's all down to the amazing lemongrass scent. It's strong and refreshing and a pretty good size for a hand soap. This is an Oxford Street exclusive so I'll be able to repurchase this at some point in the future.

Zen Soap | £6.50 // The shape of the soap I got doesn't really do it any justice. You might be able to see it from the polaroid, but the full block of soap is the shape of a doughnut and is sprinkled with gold shimmer on the top. I think I've gotten a corner piece which meant I luckily got more than the 100g but is one I'll have to cut down before using as it's a bit of an awkward shape. I bought this one because of the sandalwood notes and it smells as good as I hoped it would. 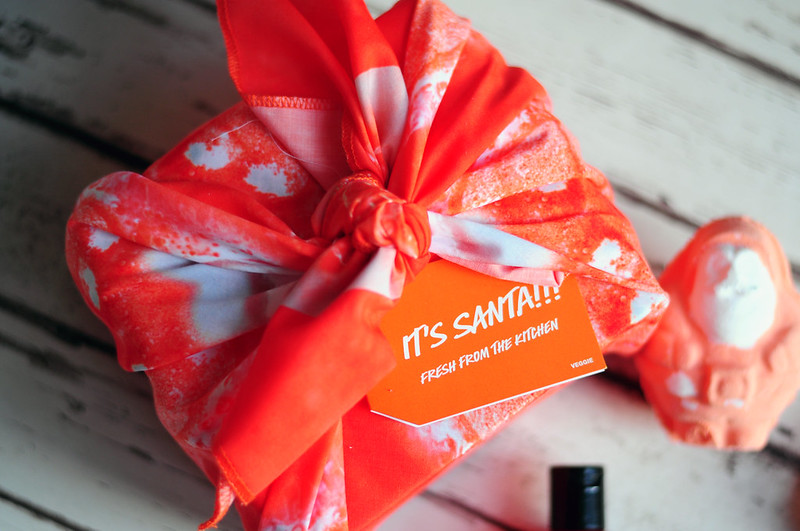 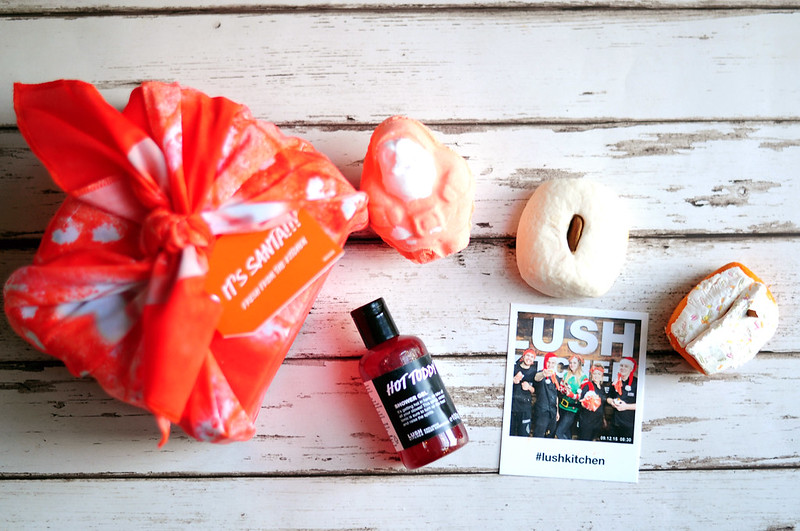 It's Santa Gift Set | £21.95 // Despite already trying three out of the four products in this gift set, I still wanted to buy it. Plus I love the knot wrap!

Hot Toddy Shower Gel // I love the Hot Toddy scent and will be able to use this with the Hot Toddy Bubble Bar I bought at the start of the month. I prefer this to Glogg which was available last month in the Kitchen.The cinnamon is the strongest scent and it lathers really well. I do have to say I prefer the bubble bar scent to the shower gel though.

Marzibain Bubble Bar // I think I can remember this being available to buy in the permanent collection and have probably tried it before although I can't really remember. It shares its scent with Snowcake Soap but I think the two vary slightly. Mazribain smelling a bit more like almonds and Snowcake smelling slightly more sweet.

Gingerbread House Bubble Bar // Sadly mine came in the post slightly broken but it'll still work fine since I am going to crumble it up to use it anyway. The design is one of my favourites along with the sweet cinnamon, ginger and lemon scent.

Satsumo Santa Bath Bomb // I love the attention to detail this bath bomb has all the way down to the moustache and belt. This has a sweet citrus scent but doesn't really put on a good show when it's added to the bath. When I've used one in the past it has sunk to the bottom and there isn't a surprise in the middle like some have.