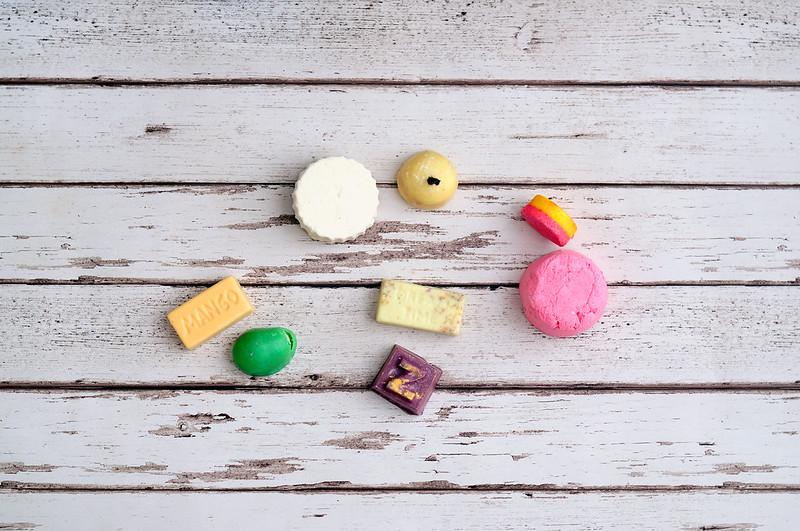 I have always been a huge fan of the bath melts from Lush and I always have a couple at hand in my bathroom. They're perfect for this time of year when my skin gets drier and it helps to keep my eczema at bay without having to apply body lotion. They're also great to mix with other Lush products and in bath cocktails. My favourites out of them all are You've Been Mangoed and Dreamtime. The other month though Lush released new and improved bath oils and I thought I'd compare the old formula with the new. Not only has the name changed from bath melt to bath oil, some of the designs have changed. Some for the better and others I just don't like. They have also changed the prices to £2 which means some of them are better value for money but others the size has reduced dramatically. The only product that hasn't changed is Ceridwens Cauldron which I'm really happy about.

You've Been Mangoed Bath Melt Vs You've Been Mangoed Bath Oil | £2 // This is one of the two that I don't like the new design of. I like that it's meant to look like a mango which matches its scent and the photo on the website looks good but in reality the design just doesn't work. Mine came with holes in it and tiny bits missing plus it was totally green and just sort of looks like a green blob. Although it looks tiny, the new bath oil formula packs a punch! I used half of it along with a few other Lush products and it was incredibly moisturising, almost to the point that it was a bit too much. I might try and use a third of it next time to get even more out of the £2. The new formula is definitely a lot more moisturising than the old.

Floating Island Bath Melt Vs Floating Island Bath Oil | £2 // I like the new design of this better than the old but I don't think it works with the name. To me this looks like a bath oil version of the now discontinued, Vanilla Fountain Bath Bomb. The major difference between the two is the size, the new is tiny compared to the old! The new version is a lot more moisturising which is a bonus but I think they really should have made it bigger. Again, I use half at a time as I find it's just a bit too oily if I use it all. I love the sandalwood and lemon scent but I am disappointed with the change in this one.

Dreamtime Bath Melt Vs Dreamtime Bath Oil | £2 // I liked the old design but I also like the new design which I think goes really well with the whole idea behind Dreamtime. I don't think the size has changed with this one but the price has decreased to £2 so it's a bit of a bargain. The lavender scent hasn't changed and I love how relaxing it is and I always sleep better after I've used it in a bath. I feel like the formula of this one hasn't really changed from the old one and it is still just as moisturising as it was. Again I tend to cut this in two so I can get more baths out of it.

MMMelting Marshmallow Moments Bath Melt Vs MMMelting Marshmallow Moments Bath Oil | £2 // This is probably the one I am most sad about the change, just look at the new design and size! The old MMMelting Marshmallow Moments Bath Melt was huge and look at it now. While I didn't love the old design I also think the new shape is equally as boring and they could have thought of something a bit better. At least the old design sort of looked like a marshmallow! I love the sweet candy floss scent that reminds me of Snow Fairy and I will still buy this bath oil, I just can't get over the size difference. I know that they've added a lot more oils and butters to it so you don't need to use as much, it just feels like we're getting less for our money. I also liked the the old formula was a bit of a mix between a bath melt and a bubble bar but with the new it just creates moisturising water.

What do you think of the changes?