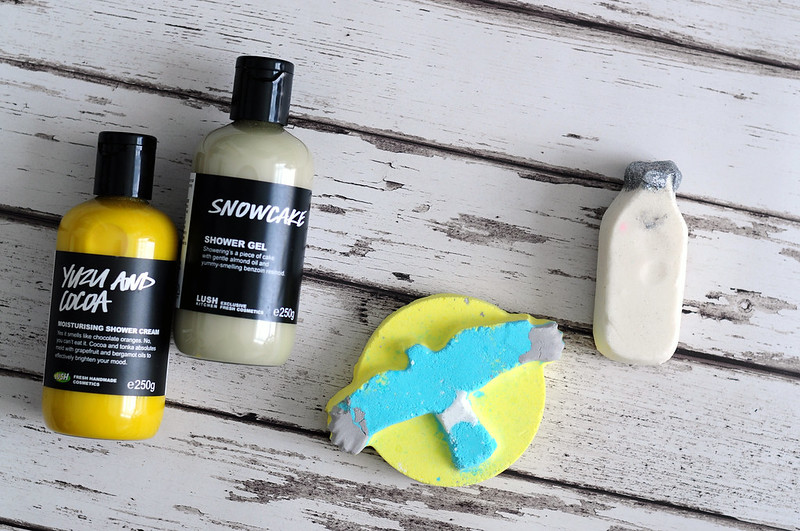 Yuzu And Cocoa Moisturising Shower Cream | £4.75 - £27.50 // Just look at the colour of it! This shower cream has the same scent as the Yuzu And Cocoa Bubbleroon. It's a sweet mix of citrus, cocoa and tonka that almost smells like chocolate orange. These shower creams are even more moisturising than the standard shower gels and it's nice to see them brought out more often. I've no idea if this is a limited edition product or if it's now part of the original collection although it has been out for a while now.

Snowcake Shower Gel // Snowcake Shower Gel was available from the Kitchen and only in stock for a couple of days. It was a complete coincidence that it was available when I was already going to make an order so I just had to add it to my basket. Only one size was available, but I would have bought a bigger bottle if I could. The Snowcake Soap that is released nearly every Christmas is one of my favourite Lush products and I always buy one. If it's even possible, I think this shower gels smells even better than the soap! Lush really need to make this permanent. It's smells of almonds and is just amazing. If it comes back to the Kitchen then you need to buy a bottle.

Skydancer - Far From The Madding Guns Bath Bomb | £3.95 // Profits from each and every one of these soft floral and liquorice-scented bath bombs will help fund equipment to satellite tag many endangered hen harrier chicks born in the coming years. I always like to buy the charity items from Lush as not only are you supporting a good cause, but you are also getting something to use at the same time. I also love that this has a liquorice scent, one of my favourites, mixed with bergamot, lemon and cinnamon.

Milky Bar Bubble Bar | £3.75 // I love the simple design of this bubble bar and it's really moisturising. It has quite a subtle scent with a hint of lemon. It's nice to have something a little more subtle compared to some other Lush products.