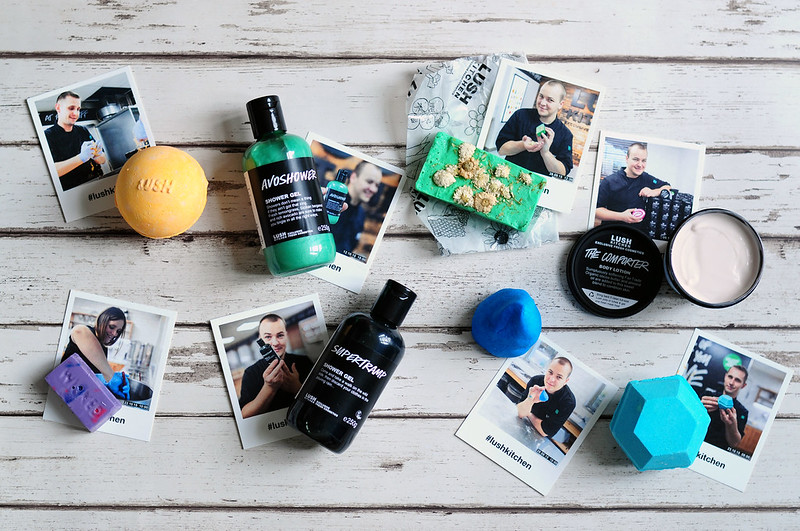 Phuket Bath Bomb | £3.75 // I feel like I've said this with a lot of the Kitchen products but I think this is one of my favourites! It's coconut scented which is a scent Lush doesn't use too often and also has a hint of orange to it as well as vetivert. It reminds me of a cocktail and I can't wait to use it. It looks quite a plain one from just looking at it but more often than not, these are the one's that have something special inside.

Something Wicked Bath Melt | £3.95 // I really like the scent of this one when it's wrapped up as it's quite subtle but once opened the jasmine becomes just a bit too overpowering for me as I'm not a huge fan of it. I do like the ginger added to it though and I'm thinking of using it in a bath cocktail to try and tone down the jasmine. It does look pretty though and I know it's going to be really moisturising.

Avoshower Shower Gel | £10.25 // I really like the Avobath Bath Bomb and have heard of the shower gel version but never tried it. I was excited to see it in the Kitchen at the start of the month but imagined it would sell out so quickly I wouldn't be able to buy a bottle. Luckily I did and I think I actually prefer the scent of the shower gel to the bath bomb. The lemongrass is the most dominant scent, at least to my nose, and I love it.

Supertramp Shower Gel | £11.95 // I bought the Supertramp Bubble Bar when it was last in the Kitchen and I fell in love with the sandalwood scent and I was so excited to see the shower gel version in the Kitchen. I can already tell I am going to ration this bottle as I don't know when I'll be able to buy another!

Soap Sud Soap | £4 // This was a last minute edition to my order and I'm happy I added it. I tend to use the soaps from Lush as hand soaps so I'll be saving this one until I need it as I'm currently using Yog Nog. It's incredibly bright and almost melts when you pick it up so I can imagine this is going to be pretty moisturising when I get round to using it. If you like freshly mowed grass mixed with chamomile then you'll like the scent of this one.

Temple Of Truth Bubble Bar | £3.75 // When this was originally sold, it was a white bubble bar which I actually think I prefer. The blue is just a bit too bright although it does make the water look nice. The scent is a mix of sandalwood, rosewood and guiacwood which gives this bubble bar quite a woody smoky scent and I really like it.

The Comforter Body Lotion | £13.95 // Since I already have both The Comforter Bubble Bar and Shower Cream, I just had to try the body lotion so I could use all three together. Yes. it is strong and totally overpowering but I love it!

Magic Bath Bomb | £3.95 // This was released in the first week of Halloween products and I actually missed out on getting it the day it was released. The next day was back to the future day so Lush resold it and I managed to buy two. This is another one I've never tried before but so many people were going crazy over it I knew I had to try it. Just look at the shape and colour! This has an unusual combination of marjoram, rose, basil, peppermint and parsley but it actually works.