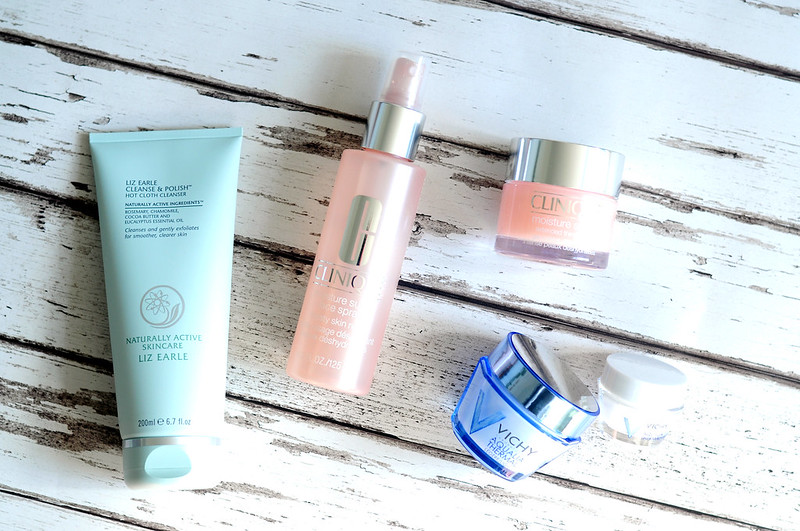 Liz Earle Cleanse & Polish Hot Cloth Cleanser | £6 - £26 // I feel like I haven't used C&P in such a long time! I decided to buy another tube as my skin always reacts really well when I continually use it. I don't usually buy the tube version but the you get more for your money and it's easier to control how much product you're using. I tend to use C&P when my skin is acting up and I just want to use a nice cleanser that is fuss free. The scent brings back memories of being a teenager as it was one of the first cleaners I started using.

Clinique Moisture Surge Face Spray | £22 // While watching In The Bathroom With Caroline Hirons I made a list of all the products I want to try and the top two on my list are from the moisture surge range from Clinique. I love spray toners although I probably have way too many than I actually need in one go. Despite this I added another one to my collection. This is designed to add extra moisture to the skin. I like the simple packaging and the spray works really well.

Clinique Moisture Surge Extended Thirst Relief | £34 // I really like the almost gel like texture this moisturiser has and although it's early days, I've been enjoying using it. It sinks in nicely and doesn't feel too heavy on my skin. I'll probably write an update once I've use it properly along with everything else.

Vichy Aqualia Thermal Serum | £22.50 // I forgot to include this serum in the photo but I bought it along with the moisturiser. This and the moisturiser are another two Sali Hughes and Caroline Hirons inspired purchases. I haven't tried either just yet, but they're next up! I want to finish the serum and moisturiser I'm using at the moment first.

Vichy Aqualia Thermal Light| £18 // I chose the light version over the standard and now I'm questioning my choice. I'll probably be using this during the winter so might need a bit more moisture than the light version offers. We'll see and I'll report back.