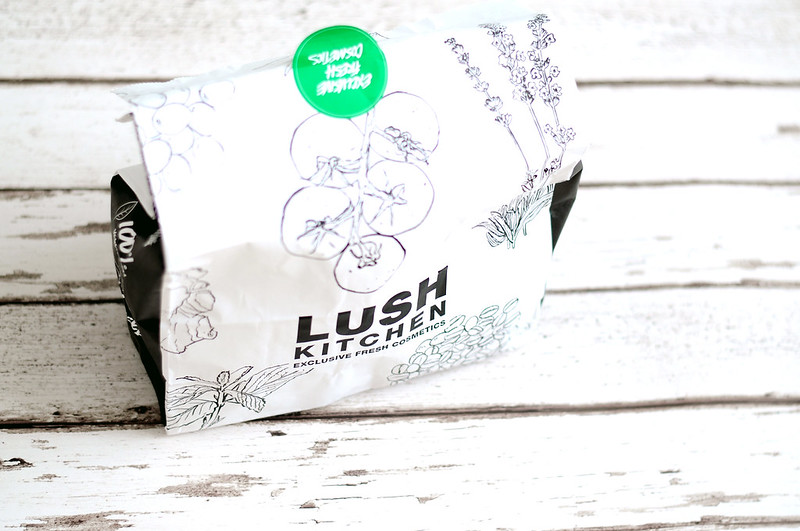 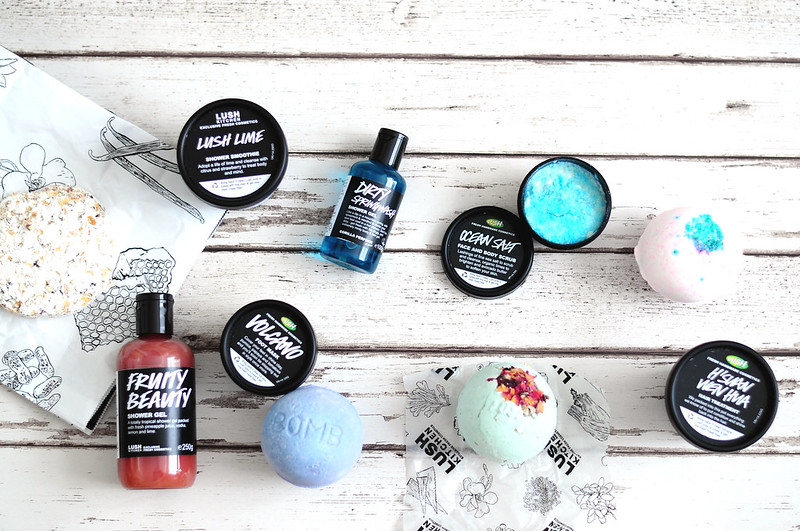 To say I have fallen back in love with Lush is a bit of an understatement. I've loved them since they only had one or two shops and we ordered from a catalogue, that's going back probably about fifteen years or so, and I always buy the Christmas products each year. I've become a bit obsessed with it lately especially the Kitchen which release limited edition products that are either new or old favourites that have been discontinued. Things are only available for a week, or less if they sell out really quickly, so I've been making quite a few small orders so I can try everything. Lush have also started selling some of the Oxford Street products online so I've ordered a lot of them. Expect a lot of Lush talk over the upcoming months!

Sakura Bath Bomb | £3.35 // I know I've used this before, but it's definitely been a couple of years since I have. It has quite a subtle scent as far as Lush products go and is a mix of mimosa, orange flower, lemon and jasmine.

Blackberry Bath Bomb | £3.25 // Another one I've used before and love. If I remember correctly there's a surprise inside this otherwise plain looking bath bomb. It has quite a sweet scent and one I really like.

Dirty Springwash Shower Gel | £4.75 // I only bought a mini one of these as I have quite a lot of shower gels to use and this is another one that I've already tried before. The scent is spearmint and I absolutely love it!

Ocean Salt Alcohol Free Face & Body Scrub | £7.25 // I've heard a lot about this scrub and it's been on my to buy list for a while. I chose the smaller tub because I didn't really need another body scrub but I wanted to try it. I definitely won't be using this on my face, but I can imagine it's going to work really well as a body scrub. It has quite a fresh subtle lime scent with a hint of sea salt.

Volcano Foot Mask | £6.50 // My mum and I used this the other week for our little pamper evening while we caught up with a TV show we're watching. We both really like the Jessica Foot Mask so I thought we'd try this one for a change. Let me just say that the pot is tiny! I should have really looked at the size of it before I ordered it otherwise I'd have known, but I imagined it to be in the larger sized tub Lush use. Since we both used it, I'll class that as two applications and we were quite sparse with it and only applied it to the bottom of our feet. Judging from how much we used I think there's only six uses in it which isn't a lot. I've had the Jessica version for a while and used it a lot and it's still only half empty.

Ignoring that though we did enjoy using it. It's made up of clay and pumice so it gently exfoliates your feet while you use it. We followed the instructions on the tub, but next time I'm going to do it a little differently. You're meant to apply a layer and wrap plastic around your feet so it doesn't dry out, leave on for ten minutes and then rub it into your skin before rinsing off. The plastic bags didn't do much to stop it from drying out so when it came to rubbing it into your skin I wasn't really able to. Next time I'm going to rub it into my skin as I'm applying it which should exfoliate the skin more and then leave to sit and rinse after ten minutes. I really liked the scent which is a strange combination of tomato, potato and cinnamon.

Foot Soak And Fancy Free | £3.95 // This is one of the newer products from Lush and I have to say I was a little bit disappointed when it arrived. As with all products if you order online, they don't come packaged and everything is loose in the box. Normally it's not a problem as there's lots of packaging peanuts, but this foot soak didn't fair too well. It's very crumbly and although you can't see it in the photo, there is quite a bit missing from it. It was all powder in the bottom of the box so I couldn't really save it. This also has to be kept in a bag as just picking it up makes it fall a part. It doesn't say how much to use per foot soak, but I'm hoping to get at least four or five uses from it. I'll report back after I've used it. It doesn't have a very strong scent which I was surprised about.

H'Suan Wen Hua Hair Treatment | £9.75 // I've tried a few of the shampoo bars from Lush but that's all from their hair care range so I added this hard to pronounce the name of hair mask. You apply this to dry hair before shampooing and leave on for twenty minutes before washing as usual. It has a similar scent to the Volcano foot mask and I think this is down to the cinnamon. Once again I'll probably include this in another blog post once I've tried it out.


Lush Lime Shower Smoothie | £9.50 // The shower smoothies from Lush are some of my favourite products although they have now discontinued a few of them. Lush Lime was on sale in the Kitchen and despite not knowing anything about it I ordered it and I'm glad I did. It smells incredibly and actually like a lime and strawberry smoothie. It's actually one of the cheaper shower smoothies so if it's still available then definitely give it a try. The shower smoothies are sort of like a shower gel, but they're a lot more moisturising.

Fruity Beauty Shower Gel | £10.25 // I love this fruity scented shower gel and I wish it wasn't limited edition. It's quite a sweet scent that goes really well with a lot of the bath bombs and bubble bars.

Fox In The Flowers Bath Bomb | £3.95 // I have to say, I'm not a huge fan of the scent of this and I think that's down to the chamomile. I guess that's the downside to ordering online. I'll still use it, but I won't be buying another one if it's ever sold again.