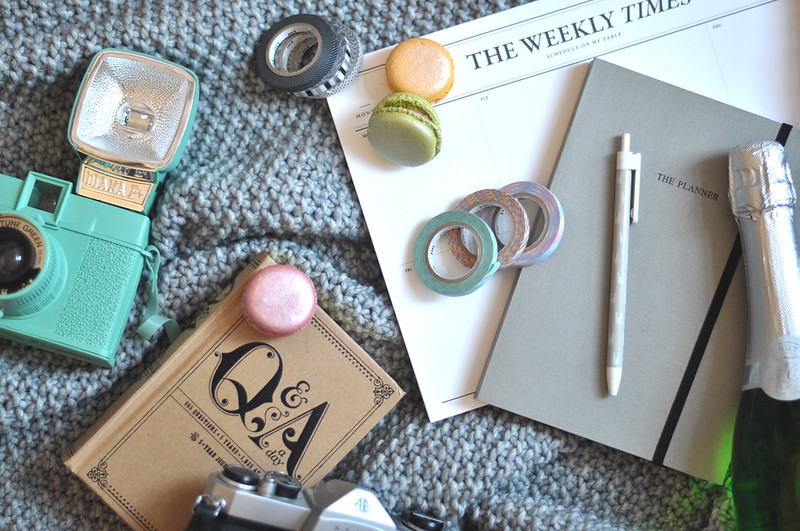 I've never been very good at sticking to New Year’s resolutions so there’s no point in me making any. I've tried but after a month or so I usually give up.  I’d like this to be the year I eat less chocolate and take up running but I just know it’s not going to happen. I don’t want to make any promises to myself.  I would like to start back up going for daily walks around the park before work though so I might try working on that.
2014 for me was a pretty meh year. Nothing bad or horrible happened but nothing exciting or interesting really happened either. I didn't go on holiday like I’d hoped to. I sort of felt like I was going through the motions of life but not really enjoying it and I’d really like this to change. Instead of spending my weekends and time off work doing nothing but sitting round the house I want to be going to new places, trying new restaurants and actually doing something with my time. Life is short and the only way I’ll start enjoying it is if I start to make an effort.
Luckily the one thing I can say has been good about 2014 is that my anxiety has been pretty low for the majority of the year. Sure I've had days when I felt like I didn't want to leave the house and times when I've felt panicky in my surroundings but they’re been fewer than previous years. On the other hand my eczema has been pretty bad this year and I have no idea why. I've tried everything but I still have at least one flare up of eczema at all times. I have this theory going that my eczema comes in seven year cycles. My eczema started when I was around five, at least from what we can tell with my prescriptions which then stopped when I was around twelve. I was eczema free from twelve to eighteen when it flared up again. So from when I was eighteen up to now, I’m twenty-four, I haven’t had a day free from eczema. If my calculations are right then my eczema should stop for another seven years sometime in 2015. I really hope this happens as I am so fed up of it. I hate feeling constantly itchy and having to rely on a steroid cream to soothe my skin as it can’t be good for me long term using a steroid cream. I also hate having eczema in places that are visible to others like my hands and face as it always looks like I've been punching a wall and my knuckles are all cut up but it’s only my eczema. I hate ruining a pair of pj’s or bedding because I've been scratching in my sleep and my skin starts bleeding or not being able to wear certain clothes as it irritates my skin. The other day I saw a really nice grey coat in the sales which I had to put back on the rail because it was made of wool. It was such a nice coat as well!
On a happier note, January 1st 2014 I signed up for the Goodreads Reading Challenge and gave myself a target to read 52 books in the year. I am a massive reader, always have been, so I actually reached this target half way through the year. I really enjoyed keeping track of all the books I was reading and it definitely made me want to read more which can only be a good thing.  I'm going to take part again this year but will increase the number of books I want to read to 104 which is 2 books per week. I might even start writing a few reviews of the books I've read.
I’d like 2015 to be the year I take more photos. I already take a lot of photos but they’re all for my blog posts. I want to start capturing more of what I do and see in my everyday life and eventually I’d like to start a Project Life scrapbook. I also want to sort out all of my childhood photos into photo albums as my mum and dad stopped putting them together when I was only a toddler. There’s so many photos from when I was growing up right through to being a teenager that are just sitting in boxes. I want to either get a phone with a better quality camera or a digital camera that works, my old one has died on me, so I'm able to have it with me at all times. There’s been so many times this year when I wished I had my camera with me to take a photo of something. I don’t want to carry my DSLR with me but I want to be able to take photos with the same quality but just smaller and easier to keep with me. Although I have a Nikon DSLR I'm thinking of maybe getting the Canon EOS M and maybe buying a lens for it. Any recommendations welcome!

I've got a feeling 2015 is going to be the year of house plants. Although I've always liked gardening and having plants dotted around my room, these past few weeks I've become sort of obsessed. If you follow me on Pinterest then you'll have seen that I've created a board titled "House Plants" in which I pin all the different plants I like and any tips I come across. Despite my love for plants, I'm not very good at keeping them alive so I'm going to make even more of an effort to try to do so. I also want to create a terrarium full of succulents. As I do every year, I'll also be growing courgettes and hopefully they grow better than last years did.

I also want to push myself with my blog this year. It is and probably always will be purely a hobby for me but I want to dedicate even more of my spare time on it. I want to improve the quality of my photos as well as perfecting my layout, even after a change around of the colours I'm not happy with it. I also want to try and blog every day this year although I'm not getting off to a very good start! We're only four days in and I've already missed a day.
Labels: Lifestyle