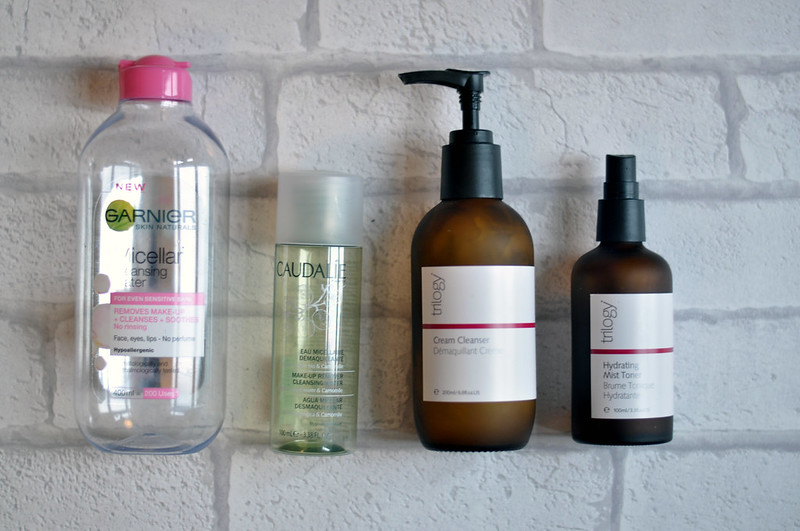 Garnier Micellar Water // This comes quite close to beating or at least extremely similar to Bioderma but the main benefit is that it's about a quarter of the price. Also it's a lot easier to get a hold of as I can buy it from Asda or Boots. I'll still buy Bioderma but for now I think I'll be sticking with Garnier. It takes all my eye make-up off without irritating my eyes or skin and with hardly any effort.

Caudalie Micellar Water // I'd forgotten how much I liked this micellar water as I hadn't used it for a while. I had a £7 voucher to spend on a Caudalie product from Essentual and as I didn't really need any other products I went for a bottle of micellar water. I only tend to use this to remove my eye make-up but it does a really good job and doesn't irritate my sensitive eyes. I also love the grape scent! I'm currently using a bottle of Bioderma but I'd buy another bottle of this at some point in the future.

Trilogy Cream Cleanser // I’ve liked all the Trilogy products I’ve tried so far and this is no different. I liked using this when I didn’t feel like using a balm cleanser but still wanted something would hydrate my skin especially if it was irritated or being particularly sensitive. The bottle and pump made it really easy to apply and I simply removed it with a muslin cloth or flannel. I would buy this again although I’m currently using a similar product from Caudalie.

Trilogy Hydrating Mist Toner // Not only is the packaging really nice, the toner itself is as well. I would buy another bottle at some point but I’m currently using a toner from Origins. 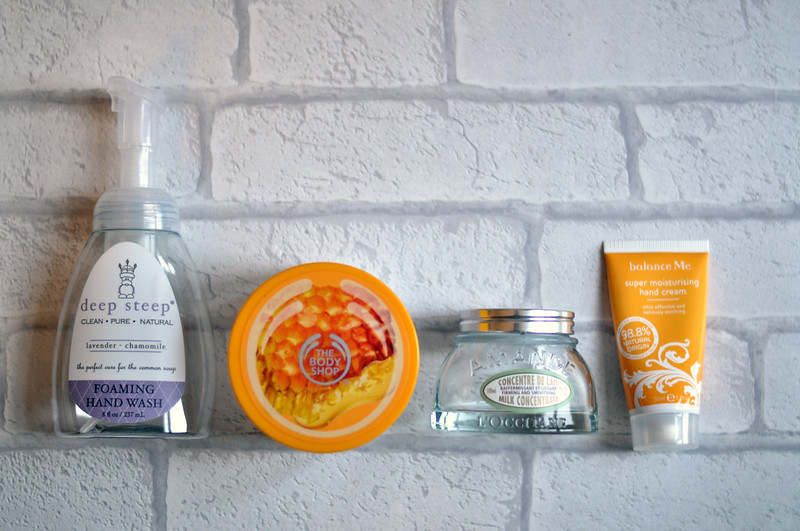 Deep Steep Lavender Chamomile Foaming Hand Soap // Unlike the hand soap I finished last month from Deep Steep, the brown sugar scent, I really loved this lavender version. I'd definitely buy it again but I did use it up quite quickly.

The Body Shop Honeymania Bath Soak // This was essentially a bubble bath and I really enjoyed using it. I used a Laura Mercier honey dipper but you can just as easily use your hands to scoop some out or pour it into running water. I don't think I'd buy another tub unless I was able to use a discount code or if it was on offer as £8 is quite a lot considering how quickly I finished it. I think I only paid half price for it though which makes it a lot better. The scent was a lot more floral than I was expecting, think honeysuckle rather than honey, but I did like it.

L'Occitane Almond Milk Concentrate //  I really liked the texture of this body moisturiser. It had a sort of gel texture which meant it sunk in really quickly and didn’t feel too heavy on the skin. I also really liked the almond scent and being able to combine it with the almond shower oil. I’m currently using a A-derma moisturiser so don’t need to think about buying a new one just yet, I will keep this one in mind though.


Balance Me Super Moisturising Hand Cream // This is an incredibly moisturising hand cream that feels more like a balm. It's one I only used at night as it took a while to sink in and even then my hands still felt a bit sticky and greasy. It's one I reached for when I'd just taken off a gel manicure and my hands and cuticles needed an extreme boost of moisturiser. I'm not going to rush out and buy another tube as I'm currently trying to use up a few other hand creams but I'd definitely buy it again in the future.

Lush Luxury Lush Pud Bath Ballistic // I wasn't really a fan of the scent of this and much preferred the bath bomb when it was smaller in looked more realistic and like a Christmas pudding. Apparently this smelt like the Twilight bath bomb but I didn't really think so, I didn't really like it whatever it was. Now I've tried it I wouldn't buy it again if it's available next year.

Lush Golden Wonder Bath Bomb // This was packed full of golden shimmer and as it fizzed away, it turned different colours which are the presents inside. I went for the alcohol free version as I thought it might be better for my skin, I couldn't really tell the difference. This had a citrus scent although I couldn't pinpoint any specifics.

Lush Father Christmas Bath Bomb // This started fizzing away red but eventually turned my bath water green which you wouldn't expect from looking at the santa face. This had the sickly sweet snow fairy scent which I was surprised about. Last year and maybe even the year before this was orange scented but for some reason they changed this to the Dashing Santa bath bomb. I like the snow fairy scent so I wasn't too upset!

Lush Star Light, Star Bright Bath Melt // Despite this being absolutely covered in silver glitter, it turned into more of a shimmer once in the water so it didn't stick to my skin like other Lush products have. I also could have split this into two and got more out of my money but I only realised this once I put it in the water and how slowly it melted. What I didn't know or expected was there to be a blue centre which slowly turned my water blue. As with all of the Lush bath melts, this made the bath water incredibly moisturising and I didn't need to follow up with a separate moisturiser. If this came out again next Christmas I'd definitely buy some more. The scent was really nice as well, a mix of ginger, lavender and lime.

Lush Dashing Santa Bath Bomb // I really liked the citrus scent of this bath bomb but the rest of it was a bit boring. It fizzed away slowly and turned my bath an pinky orange with gold shimmer but there wasn't really anything fun to watch like the others. It was the most moisturising bath bomb I've tried though and I didn't have to moisturise afterwards. I sort of feel like if you're paying £3+ for a one use bath bomb then it has to be impressive, this wasn't really.

Lush Cinders Bath Bomb // I always buy a couple of Cinders bath bombs each year as I love the scent and also the smaller size. They're usually about half the price and half the size of normal bath bombs which I prefer as I have quite a small bath and it doesn't seem as such a waste with only one use. I love the Christmas scent and also that you can hear the popping candy fizzing away when you add it to the water. I'm not a huge fan of the colour of the water it turns but I can ignore that.

Lush So White Bath Bomb // This is another one that I buy year after year as the unusual fresh apple scent smells amazing. It turns your water a subtle pink and I used the So White shower gel at the same time. 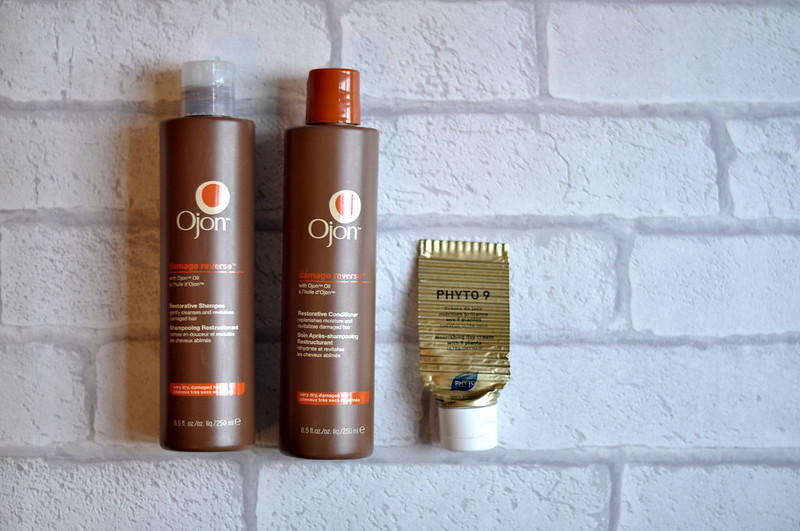 Ojon Damage Reverse Shampoo & Conditioner // I got these two when Ojon last had the offer on where if you took an empty shampoo or conditioner bottle into store then you got a bottle for free. It's taken me quite a while to use them both up as I discovered Philip Kingsley Itchy Scalp shampoo shortly after getting them and I had a few other conditioners to use up first. I liked the shampoo as it didn't irritate my sensitive scalp but I have to say I didn't notice much of a difference as far as the damage reverse aspect goes. I kind of feel when it comes to hair, if it's already damaged then there's nothing you can really do apart from having a hair cut. I don't think I'd buy these full price but would get them again if there's another offer on.

Phyto 9 Nourishing Day Cream // I've heard people rave about this leave-in conditioner type cream so I bought probably more than a year ago now and it's taken me this long to use it up. I have to say, I was a bit disappointed with it. Despite going through the whole tube, I never really felt like I knew how to use it. I tried applying it to both wet and dry hair and it just left my hair feeling sticky and looking a bit greasy. I tried using less and less product but still got the same result. I saved it for days when I was wearing my hair up anyway before washing but wanted that extra bit of moisture to the ends. I'm glad I was able to use it all up and not throw away a nearly full product but I won't be buying it again.