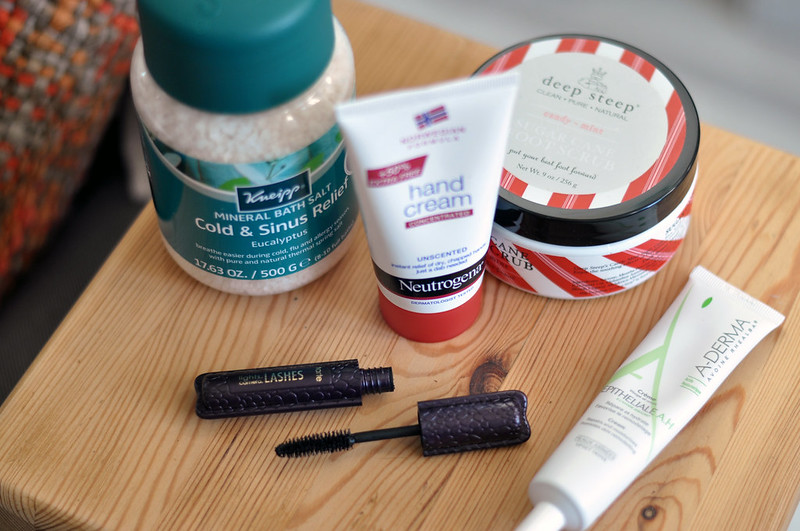 Kneipp Eucalyptus Cold & Sinus Relief Bath Salts | £8.95 // I've had a horrible cold this month and these bath salts have been a life saver. The scent is very strong so it really helps to clear blocked noses and allows you to breathe properly especially if there's a bit of steam in the air from the bath. Kneipp is a brand I haven't heard too much about but I've really loved the couple of products I've tried so far and I've got all the other variations of the bath salts on my to buy list.

Tarte Lights Camera Lashes Mascara | £19.50 // I've heard a lot of people raving about this mascara but I never thought I'd get a chance to buy it, Tarte isn't that easy to get a hold of in the UK, but luckily a mini tube was included in a beauty box. I was surprised that the packaging is completely plastic as I imagined from seeing it in videos and photos that it would be made out of fabric, at least the outside. This mascara is as good as everyone says it is and has quickly become one of my favourites which is great but it's currently sold out on QVC. I'm not usually a fan of traditional mascara brushes, I normally prefer plastic wands, but I really like this one. It also lengthens, defines and adds volume to my lashes without them looking clumpy.

A-Derma Epitheliale A.H Cream | £6.25 // So I mentioned in my December skin care post that I was having a pretty tough time with my eczema especially on my face. I tried every single product in my cupboard but nothing worked and my skin was just getting even more irritated and sore. I'd booked a doctors appointment even though I didn't really want to use a steroid cream on my face but I was at a complete loss with what to do with my skin. A mention from Jenny on twitter as well as Barbara talking about it in a video, I ordered the A-Derma Epitheliale cream in the hopes that it would help. After only a couple of uses my eczema started to disappear and was pretty much gone from my face after a week. I have no idea why this cream worked when nothing else would but I'll definitely be keeping a tube of this in my bathroom cabinet at all times. It also feels really light on the skin but is still moisturising enough for my dry skin. I do have to say I really hate the smell and although it does eventually disappear, it takes a while. It reminds me of wet clay from back in my A Level art days, I hated it then and I really hate the smell now!

Neutrogena Unscented Hand Cream | £3.69 // As well as on my face, my eczema has flared up quite badly on my hands and again nothing I already had was working. If anything the hand creams I was using was only making the eczema worse and my hands would hurt and sting when I applied it. I put this down to the perfume in the ingredients list and despite having like eight tubes of hand cream, none of them are fragrance free. A quick google and I came across this one from Neutrogena which I could pick up while doing my weekly food shop in Asda. I was a bit dubious about whether a hand cream that costs less than £4 would really work but it did. It feels like more of a balm than a cream so it does take a little bit longer to sink in but when it does it sort of leaves a matte feeling to the skin which I like especially for during the day at work. This doesn't sting or irritate my skin and simply moisturisers my hands which is all I wanted. My eczema is still pretty bad but because of other factos and no longer due to the hand cream I was using. I have also bought a tube to keep in my bag so I have it with me at all times.

Deep Steep Candy Mint Foot Scrub | £12.9 // Had I not bought this online and instead was able to smell it in a shop I probably would have bought it purely for the scent. It smells incredible! It smells exactly like peppermint bark which unfortunately we didn't get any of this year although I'm still hopefully I'll be able to buy some candy canes and make my own. This is meant to be a foot scrub although there isn't any reason it can't be used all over the body, you'd just finish it up quicker. Scrubs that are made up of sugar are my favourite as I find them more abrasive and also dissolve in the water so no mess is left behind after the shower or bath. This also leaves a film of oil on your skin after you use it and makes your skin feel incredibly soft. It's one of those products that you don't need to follow up with a separate moisturiser which is always a bonus.