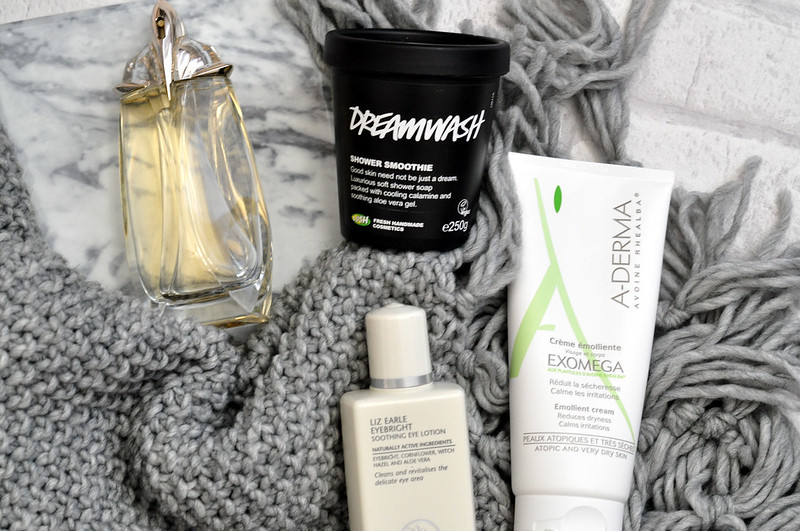 Thierry Mugler Alien Extraordinaire | £49.50 - £67.50 // I have the original Alien perfume from Thierry Mugler but I much prefer the Extraordinaire version. They both have similar notes but this version doesn't contain notes of jasmine and is a bit lighter smelling. Despite being an eau de toilette I find this lasts better than some eau de parfums do. I can still smell in on myself after an eight hour shit at work. I also like that you can buy a refill bottle which works out cheaper once you have a empty bottle.

The last two weeks of this month have been quite rough skin wise as my eczema flared up quite badly especially my hands and face. I have no idea what has caused it but everything seems to be irritating my face, it seems like even the air is causing my skin to react and don't get me started on whispy bits of hair. This weekend I've had to practically scrap back my hair to try and stop my skin from being so irritated. I've also had really bad flare ups around my eyes which have been very painful and the only thing I've used to remove my mascara has been Liz Earle Eye Bright (£10.75). I know I can rely on this if my skin is being sensitive and already sore as this will not make it any worse.

As my skin has been so sensitive this last week I haven't even been able to cleanse properly and anything I have applied, despite usually being fine with the products in my skin care routine, it has felt like I needed to scratch it all off and my skin would become red and irritated. The only thing I have been able to do is gently wipe my skin with a cool damp muslin cloth and then apply a thick layer of A-Derma Exomega Emollient Cream (£10.50). I first discovered this cream on Giada's blog and have been using it as my body moisturiser for the past month to try keep my skin moisturised and therefore avoiding eczema flare ups. So far, after getting into a routine of applying it each night after using Lush Dreamwash (£9.95) in the bath, it's been working well. On the tube it says it can be used on the face and body but I would have thought to try it on my face until now. It does take a while to sink in but once it does it's helped to make my skin, on my face and body, feel and look a million times better. It reminds me of a cheaper version of Kate Somerville Eczema cream and one I'm really glad I have discovered.