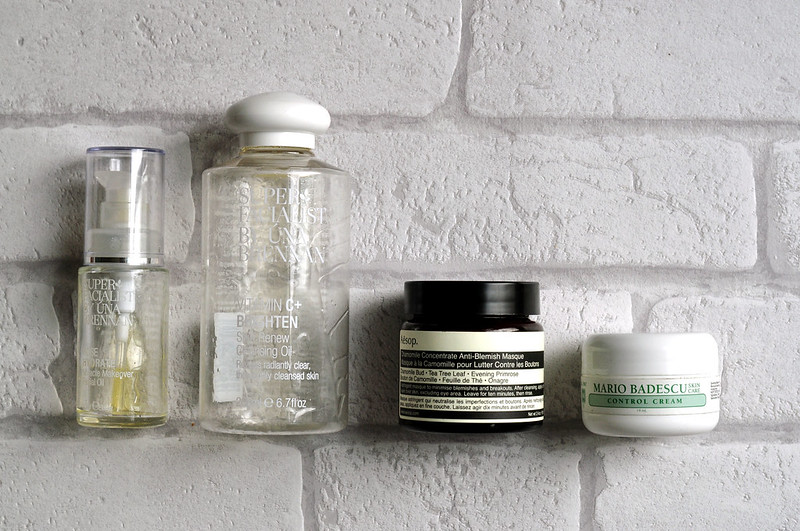 Super Facialist By Una Brennan Rose Hydrate Miracle Makeover Facial Oil // I discovered this thanks to Caroline Hirons and it is just as good as she says it is. If you have dry skin, especially in the winter, then you really need to try this. You apply it to dry skin before cleansing and massage it in for a few minutes before removing with a flannel. It does leave your skin feeling slightly oily but as you follow up with a cleanser, I usually use a balm cleanser for an added extra bit of moisture, the greasy feeling goes away but you’re left with incredibly soft skin and all dry patches are gone. Over the winter I tend to use it a bit more often but usually it’s about once a week as a skin treat. I will be picking up another bottle and maybe trying some other Una Brennan products if they’re on offer.

Super Facialist By Una Brennan Vitamin C+ Brighten Skin Renew Cleansing Oil // I’ve had this cleansing oil for what feels like years but has probably only been about six months. It seems to have lasted for such a long time which I guess makes it quite good value for money although I haven’t been using it on a daily basis. I bought this around the same time as the Origins cleansing oil so I could compare the two. Although the packaging of the Origins is much better, you can buy a pump instead of an open bottle, the actual cleansers are pretty similar. Although I don’t use my cleanser to remove make-up, I prefer a micellar water, this does a good job and melts everything away even stubborn make-up. I like to remove it with a flannel and warm water but this can simply be washed off as it emulsifies with water. I’m still working my way through the Origins version but I would buy this again especially if it’s on offer and at an even cheaper price.

Aesop Chamomile Concentrate Anti-Blemish Masque // I was a bit disappointed in this mask as I didn't really notice a difference when I used it. Unfortunately I bought this one before the Aesop Parsley Seed Masque which I really like and find a lot more effective at keeping my skin clear. I’ve heard people rave about this which is why I bought it in the first place but I wouldn’t buy another jar.

Mario Badescu Control Cream // It's taken me a long time to finish this little pot as partly I was saving it because I didn't want to finish it as it's currently unavailable. The second reason I was using it sparingly was because it's come out that Mario Badescu products, it might just be Control Cream I'm not sure, have unlabelled steriods in them. This is probably why this cream worked so well on my eczema and made it practically disappear over night like a steroid cream would. If this became available again I'd probably buy another one but then it probably wouldn't work as well without the steroid. 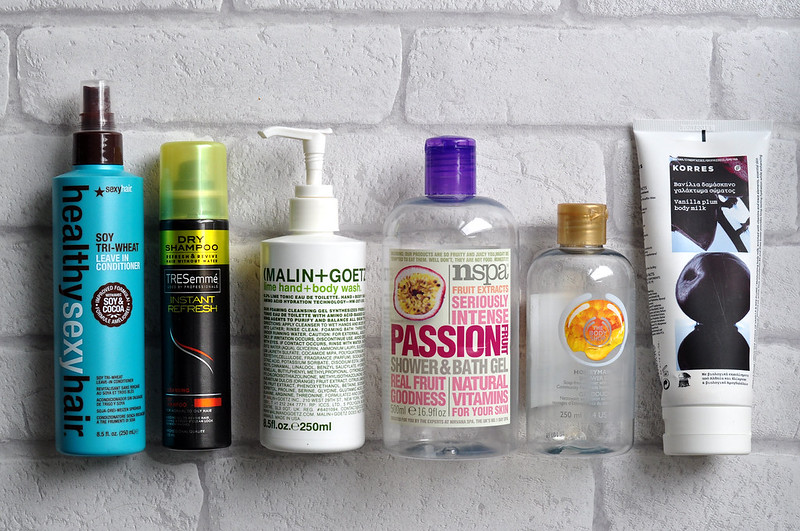 Healthy Sexy Hair Soy Tri-Wheat Leave In Conditioner // I was quite disappointed with this leave in conditioner as it was hyped up a year or two ago so I gave in and bought it. No matter how little I applied, this always left my hair feeling sticky and horrible. It's taken me a long time to finish this bottle as I didn't want to just throw it away and waste my money. Needless to say I wont be buying another bottle and am currently using one from Ojon.

TRESemme Instant Refresh Dry Shampoo // I think I got this in a beauty box and am quite glad I didn’t pay for it was it was disappointing. It worked well to make my hair look clean and fresh but it made my scalp and hair feel quite powdery and heavy. It also didn’t create any volume which other dry shampoos do. It doesn’t leave your hair looking grey though which is a bonus although with my hair being light I don’t need to worry about this too much. I wouldn’t buy another bottle and instead will stick to Batiste.

Lush Sparkler Bath Bomb // I'm adding this in even though I haven't got anything to show for it but I have used up this bath bomb. This was one of the bonfire night bath bombs and is meant to represent a firework in your bath. Mine broke in two while in the box so I was able to get two uses out of it instead of one. It smells of Rose Jam Shower Gel, which I've just actually bought, and turns your bath water yellow with copper glitter. I'm glad I was able to try it but I wouldn't rush out and buy another one.

Lush Northern Lights Bath Bomb // This is another one I don’t have any evidence of and I’m trying to make my Lush supply last as long as I can. I’m limiting myself to one Lush bath a week, usually on a Sunday, which should last me through Christmas and for a while after as well. This was very similar to the Sparkler bath bomb. Immediately after being added to the bath you can see blue and yellow appearing out the middle as well as the purple that is obvious from the outside. This bath bomb made my skin feel incredibly soft which not all of them do and little silver stars floated around the water. The scent of this one is jasmine and ylang-ylang which I could still smell a few hours after my bath.

Malin And Goetz Lime Hand & Body Wash // The only reason I bought this, aside that I thought it would smell good, was because I did not want to pay £5 for delivery when I was making an order from Space NK especially as I was only a couple of pounds off free delivery. As you probably know ,if you're beauty obsessed and shop from Space NK often, that there is really anything for under £5 so I went for this. It smells nice, of limes obviously, but it isn't as strong or powerful as I thought it would be. If I had known this before hand I might have chosen a different scent or maybe a different product.

NSPA Passion Fruit Shower Gel // These NSPA shower gels are some of my favourites as they're incredibly cheap but smell amazing. I always have a bottle or two in my bathroom cupboard as they're always on offer for two for £3 or £4. I'm currently using a vanilla scented one.

The Body Shop Honeymania Shower Gel // This was a bit of a mixed product for me as it wasn't very effective on wet skin if you're in the bath but if you apply it to dry skin before getting into a bath or shower then it's a lot more abrasive. It feels a lot more like a cleansing balm with exfoliating particles compared to your standard body scrub which I quite liked as it felt more moisturising on my skin. Again this has a more floral scent than I was expecting similarly to the bath soak. I don't think I'd buy this again although I did like using the range all together, I've tried cheaper and better scrubs than this.

Korres Vanilla Plum Body Milk // I really like Korres body moisturisers as they smell nice, sink in quickly and best of all keeps my skin moisturised. I was a bit disappointed with this scent though and I wouldn't buy it again. 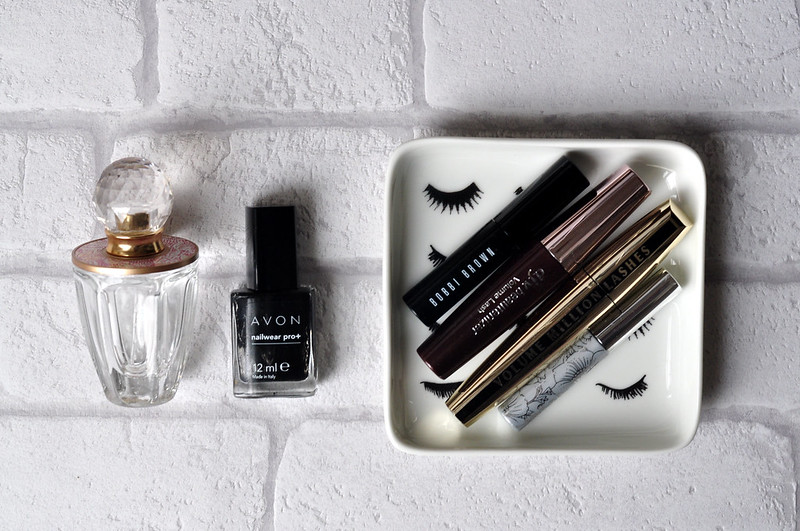 Taylor Swift Made Of Starlight Perfume // I loved the original Taylor perfume by Taylor swift and finished the bottle very quickly. This Made Of Starlight version is still a nice scent, it's just not as nice. The notes are osmanthus flower, honeysuckle, orange blossom, apricot, passion fruit, mandarin leaves, musks, peach, and woods. I'm glad I only bought the smallest size. I think I'll be sticking with Taylor from now on.

Avon Licorice Nail Polish* // It’s been a while since I’ve finished a full size bottle of nail polish but this black polish from Avon is a staple. It’s a glossy black that sometimes depending on how careful I am when applying I can get away with only one coat especially if I’m going to add a glitter over it. I will be buying another bottle but I want to finish the other black nail polish I have from Barry M first.

Bobbi Brown Everything Mascara // I got this mascara sample free with a Bobbi Brown order and I was really looking forward to trying it. It's called Everything Mascara so I thought it would define and lengthen lashes as well as adding volume. All it did though was turn my blonde lashes black without any length or volume. If you're looking for a very natural mascara that looks like you're not wearing anything at all then this is probably the one for you but personally I like my lashes to stand out as mascara is usually the only make-up I wear on a day to day basis. Not wanting this mascara to go to waste though I used it underneath the D.V.J mascara. It hasn't put me off trying other Bobbi Brown mascaras but I wouldn't buy the full size of this when I can use a single cheaper mascara that gets the job done without the hassle.

D.V.J Beautenizer Volume Lash Mascara // I was excited to see this mascara in a gift with purchase from Cult Beauty as Amelia raved about it. As soon as I tried it for the first time though I knew I wouldn't like it. No matter how careful I was when applying it, my lashes would clump together so it looked like I only had four eye lashes. I thought it might just be because I'd only just opened it so waiting a couple of weeks before trying it again in the hopes that it might have dried up a bit and would work better. It didn't though and the only way I could get it to work was to wipe off most of the product with a tissue, probably not the most hygienic thing to do, and then layer it on top of the Bobbi Brown mascara. Even doing this I had to be careful and only apply one very thin coat as it would all clump together easily. Needless to say I will not be buying this again and am only glad I got this for free and didn't actually spend any money on it!

L'Oreal Volume Million Lashes Mascara // This is one of my favourite mascaras and I’ve already gone out and bought another tube. It has a plastic wand which I much prefer over the standard brush and I find it defines my lashes, holds a curl and adds volume without clumping. This time I’ve gone for the extra black version so I’m hoping the formula is just as good but a richer black shade.

Clinique Bottom Lash Mascara // I’ve lost count of how many tubes of this mascara I’ve been through and I use on a daily basis without fail. This doesn’t smudge or flake off throughout the day and defines my bottom lashes without looking too over the top. I have extremely fair, almost invisible lashes, so I always like to wear mascara on my bottom lashes.