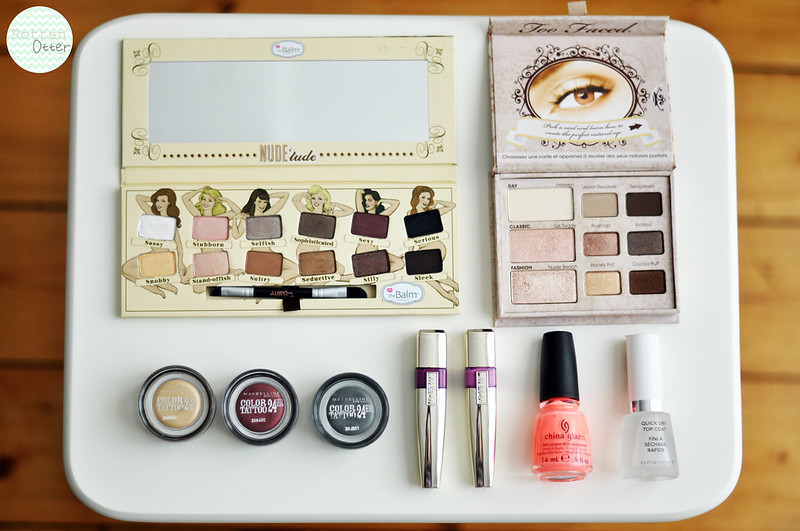 The Balm Nude'tude Eyeshadow Palette // Since I used my Birchbox points to buy this I think I only used about £5 of my own money so I don't regret buying it as much as I could have. I bought it after Essie raved about it and I don't know what I was thinking. It's almost like I wasn't even looking at the colours as there's only one or two that I've used and actually would wear. The colours don't even seem like they go together, unlike the Naked palettes, and I have to use other shadows from other palettes. It's almost like photos make the palette look better, even the one I took, but in real life it just doesn't work. I also don't like the texture of the shadows, they're incredibly pigmented and buttery but almost too buttery and soft so there's a lot of fall out.

Too Faced Natural Eye Shadow Palette // Another palette I regret buying and one I paid full price for so regret buying it even more! First of all the Nude Beach shade is basically pressed glitter so there's a lot of fall out and glitter but no pigmentation. The three matte shades just seem to disappear when I apply them even though they look pigmented when I swatch them. I should have just stuck with the Naked palettes as the only colour here that I use is Silk Teddy.

Maybelline Colour Tattoos in Immortal Charcoal, Metallic Pomegranate and Eternal Gold // It's not all of the Maybelline Colour Tattoos that I've found disappointing, only these three. I have three others that I use a lot and would repurchase. My problem with these three is that the colours look really nice in the jar, especially the purple, but once applied and blended the colour disappears and all that's left is glitter.

L'Oreal Glam Shine Stain Splash // I was excited to try these when they launched as they're meant to be a dupe for the YLS Glossy Stains. The light purple shade, Eve, looks gorgeous in the packaging but no matter how many layers I apply, it looks like I haven't applied anything. As for the darker purple, Milady, it has a lot better pigmentation but no matter how careful I am when applying, it always looks streaky and splotchy.

China Glaze Nail Polish in Flip Flop Fantasy // This is probably the brightest nail polish that I own, it practically glows in the dark, and before I bought it I was so excited to get it and I imagined wearing it on my toes every day throughout summer. I know neon nail polishes are known for not having the best formula but this one is so bad it's really put me off using it. It's incredibly streaky even after three coats and it doesn't glide smoothly over the nail I don't know if I just got a dud bottle but how mine looks on the nails looks nothing like other swatches even if I use a white polish underneath.

Revlon Quick Dry Top Coat // I bought this without reading any reviews along with the base coat and I really wish I hadn't wasted my money. The base coat I love but this makes my nail polish flake off almost immediately. Not even twenty four hours after applying and there's chips of the polish gone or even whole pieces fall off. . I've only used it two or three times and am tempted to throw it away as I know I just wont use it.