I finished reading Where She Went by Gayle Forman today. There’s a page or two in the book were Adam is on a busy train and people start recognising him, he’s a “rockstar”, and it’s like a ripple of recognition until everyone is staring at him, even if they're not really. He starts to panic and runs off the train. I finished reading it and was just like, that is exactly how I feel. Fast forward an hour or two and I’m listening to Ed Sheeran’s new album and suddenly feel like pouring my heart out. Surprisingly it has made me feel a million times better. I originally wrote all this in a word document and didn't even think about posting it on my blog. Don’t feel like you have to read on. It’s rambly and probably doesn’t make much sense. It’s more for my own benefit. I might not even keep this post up for longer than 10 minutes. 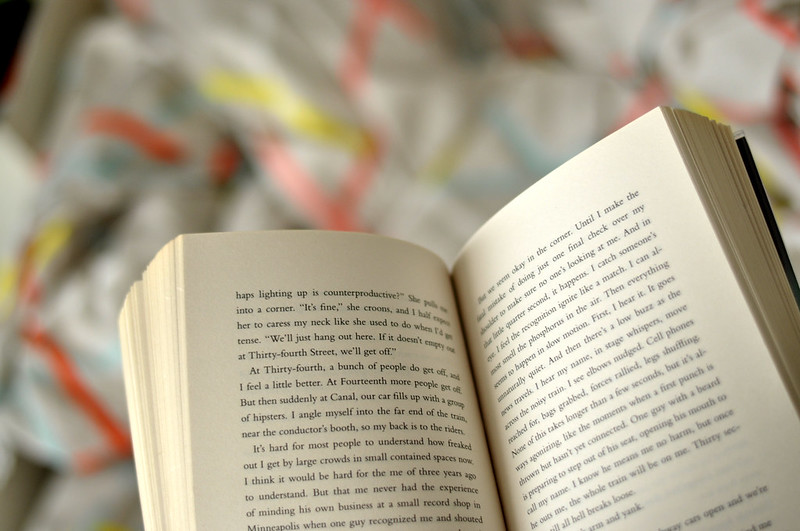 I was 17, happy, loving life, and then one day my world was turned upside down. It took me years to work out what had happened and what was wrong with me. I’d be walking to school and as soon as I’d step foot into the classroom I’d get this sudden rush of fear and that I needed to bolt. I’d be sitting on the bus and feel like the whole world was closing in around me and I had to get off as soon as possible. I’d be talking to my friends, who I had known for years, and I’d suddenly panic and feel like everyone was staring at me even if they weren’t. With friends I started talking less, listening more and retreating into my shell.  I’ve lost count of the number of panic attacks I’ve had whilst on trains, in shopping queues and on nights out. Even a simple task as going down to the local tesco has brought on panic attacks before. I’ve missed out on job interviews because I was so scared of having a panic attack while in the interview I actually had one before I was meant to leave. There were times when I only left the house to go to Asda. It was so crippling. I felt like I completely lost all of my confidence, independence and personality. I felt like I wasn't in control of my emotions, how I was feeling and the anxiety would just creep up on me. I didn’t feel like me anymore and I didn’t know why. I didn’t speak to anyone about it though, which now I wish I had, I just tried to get on with life as best as I could.

It’s only after reading and hearing about other bloggers experience with anxiety that I could finally put a name to it. I suffer from anxiety and panic attacks. There is nothing “wrong” with me. I am normal just like everyone else.

There was one time when I was coming home from college on the bus and I had a sudden panic attack and just had to get off the bus. I’d only been on the bus for all of five minutes but I just couldn’t stand it. I felt like everyone was staring at me, like I couldn’t breathe and there was no fresh air. Like the world around me was closing in on me. Only after getting off the bus and calming down did I realise I did not have a single penny in my purse to get the bus home the rest of the way. I ended up walking for 45 minutes all the way home simply because I felt like I couldn’t sit on the bus for 15 more minutes. I can remember so vividly getting home, rushing into an ice cold shower and just crying my eyes out.

At the end of every week in art college we had to talk to the rest of the class and recap what we’d been working on. There wasn't a single week that I didn't dread going in each Friday and having to get up in front of everyone and talk about my work. Although everyone had to do it, I felt like all my peers where judging me those few minutes I was speaking. I felt like I was being singled out. My face would turn bright red, I would start sweating a lot and messing up my words. I felt like running out of that room and on several occasions I nearly did. I started to skip Fridays purely so I wouldn't have to get up in front of everyone. This completely ruined my art foundation course for me and is probably one of the main reasons why I didn't carry on with art at university.

While still at sixth form and sitting one of my A Level exams I had a really bad panic attack. At that point I didn't even know what was happening to me. I remember asking if I could go to the toilet but was told no. I ended up just walking out and soon as I did I ran into the toilet and burst into tears. I was thinking how could everyone else be sitting there perfectly calm and I'm feeling like a tornado is going round inside my body and head.

I have no idea where this even began and cannot really pin point what made me start having panic attacks and suffering from anxiety. It literally feels like one day I was perfectly fine and happy and the next I just wasn't.

In the space of a year I went from having a lot of friends to having none. I've had some of my worst panic attacks on nights out after drinking so I started making excuses about not wanting to go out. I’d say I didn't have enough money even if I did. I’d say I had to stay in with my family even If they said they were happy for me to go out. On the nights that I did go out with them I’d drink way too much in the hopes that it would stop me having a panic attack. It did not help, in fact it made them worse.

Looking back on it now, I'm not surprised I slowly lost touch with my friends. I was always saying no and cancelled plans a lot. They must have been so fed up with me! I know I was fed up with myself.  It’s not that I didn't want to hang out, I wanted to go the cinema, go to a restaurant for dinner, go shopping or simply get everyone together in someone’s house and watch a film or have a pamper night. All they wanted to do was go out and drink.

At the end of our A Levels we all went away to Zante for two weeks. I had an amazing time but everyone wanted to go on a booze cruise one of the days. I said I didn’t feel like it. How could I explain to them, seemingly completely out of the blue, that even just the thought of 1) being on a boat which I could not simply walk off of and 2) be surrounded by people drinking brought on a panic attack?? I know I should have tried, knowing them and who they are they would have understood, but I felt so embarrassed. Something they thought sounded like an amazing experience, to me it was a worst nightmare.

I do wonder though after being friends with some of them for over eight years, couldn’t they tell something was going on with me? That I had changed? No one ever asked me if anything was wrong. Maybe I was just hiding it all too well? Putting up a front when really inside I felt like I was dying. Perhaps I was acting like myself to others but really I was far from it.

I have come a long way since those first panic attacks though. I started this blog which has been life changing and also a massive step by putting myself on the internet. I honestly don’t know how I would have gotten through these last six years without it. It has given me a creative outlet that I had lost, a love for photography and a chance to interact and talk to people with the same interests as me and learn more about anxiety. Thank you for choosing to read my blog, it truly means the world to me. I have now been in my current job for nearly two years. That is two years of getting the bus to and from work every day. I still have panic attacks on the bus but I have learnt how to cope with them and calm myself down without getting off the bus, a major thing for me. An ice cold bottle of water helps, a lot. You’ll never see me without one. I remember there was a time when my anxiety was particularly bad that it would take me a good thirty minutes to psych myself up just to leave the house and get on a bus. Now I think nothing of it leaving for work each day. In my job as a receptionist I am talking to people 90% of the time and although I still panic on occasions, mess up and stutter my words, my confidence in my self has grown. I have managed to deal with difficult and complicated situations without completely breaking down. I’ve had people shouting at me in work and I have handled it. If that had happened a few years ago I would have had a panic attack right in front of them.

My question to you, anyone who has actually read this far, if you suffer from anxiety and/or panic attacks, how did you talk to your parents/family about it? Despite this all going on since I was 17, I actually haven’t spoken to my parents about it. If I’m having a hard time I deal with it best on my own and in my own time without speaking to anyone about it. I am yet to have a panic attack when I’ve been around them and I’m putting that down to being completely comfortable around them. They’re part of my safe place along with my bedroom/house. I just don’t know how to bring it up. I feel like it’s been going on for so long I don’t really know what to say. Do I just put it out there and say I suffer from anxiety and panic attacks?? Opinions are welcome! just be nice :)