This is my little Christmas wishlist to try and get in the spirit. With the warm weather recently it feels like the end of August and not the middle of October!! Can't believe it'll be Christmas in two months. This also means it's only a couple of weeks until the little family gathering we have each year around bonfire night.

As you can probably see the products are mostly nail related. Nail polish and nail art have definitely taken a front seat of what I'm loving at the moment. A lot of these have also been on my wishlist for a long time and have heard a lot about. 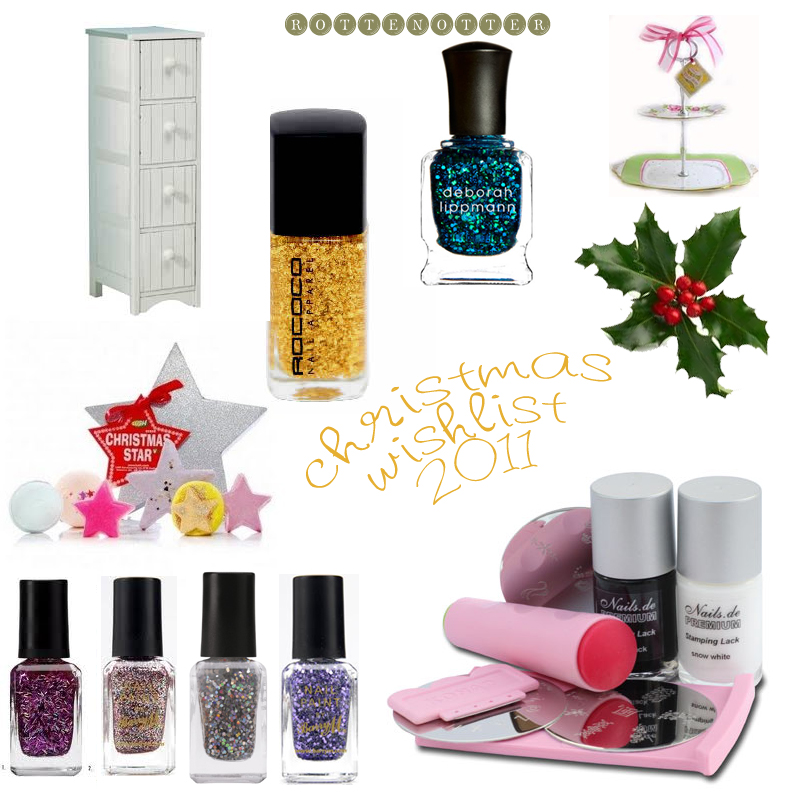 Argos Four Drawer Set - I already have one set of drawers but I'm a bit ashamed to say it's already full of nail polish. I was going to buy the Alex drawer set from Ikea but I actually prefer the Argos one. This also means I'll be able to store all my nail art stuff in a drawer instead of a seperate box.

Rococo Gold Leaf Nail Polish - A polish that I would probably never buy myself but am definitely having it on my Christmas list. At £25 it's probably the most expensive nail polish I'll ever own but I just love the looks you can get from it.

Deborah Lippmann Across The Universe - I know you can get a much cheaper version from Essence but I just can't track it down anywhere. If I do get this one, it'll be the first Lippmann polish I'll own.

Cake Stand - I really want a cake stand so when I make cakes I'll have something nice to photograph them on. Loving these ones from Milly.

Lush Christmas Products - Each year I always get at least one product from the Christmas range from Lush. This year they seem to have brought out more than usual, not that I'm complaining! I'm just a bit spoilt for choice on what I want.

Barry M Glitter Polishes - I don't think you can buy these in stores, at least I've never seen them. I've wanted them since seeing them on various nail blogs. I especially don't have anything like the one on the left.

Konad Stamping Set - And finally, a konad stamping set. I only really want it so I can do certain designs like zebra print, dog tooth and leopard print.