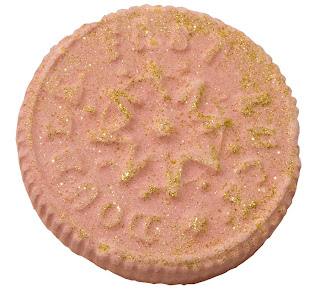 Lush describes this as “In our Far Eastern Lush shops, Karma is amazingly popular. There's something about our signature scent of Kensington High Street in the 1960s that makes our Chinese and Indonesian customers want to take it home and cover themselves in it: fragrance, soap, dusting powder - you name it, they adore it! Mo wanted to make a special Double Fast Luck Emotibomb in the shape of a symbolic lucky coin, specially for Chinese New Year. Scenting it with Karma was a match made in Dorset. Place it on the floor of your shower and as it fizzes into nothingness, it releases its calming, reviving spicy-orange scent to bring you good luck, double fast.”

What I think: This has such a strong smell! It’s a bit too strong and I don’t think I particularly like the smell either. I can’t tell why though, if the scent was a bit weaker maybe I might like it more, I don’t know. I haven’t really been having showers recently, loving baths more, so I used it as a bath ballistic instead. It is huge so I broke it up into 3 pieces hoping the scent would lessen which it hasn’t done. The glitter is only on the top which is a bit of a shame.

Re-buy? I want to try the other emoti-bombs but won’t be buying this one again.